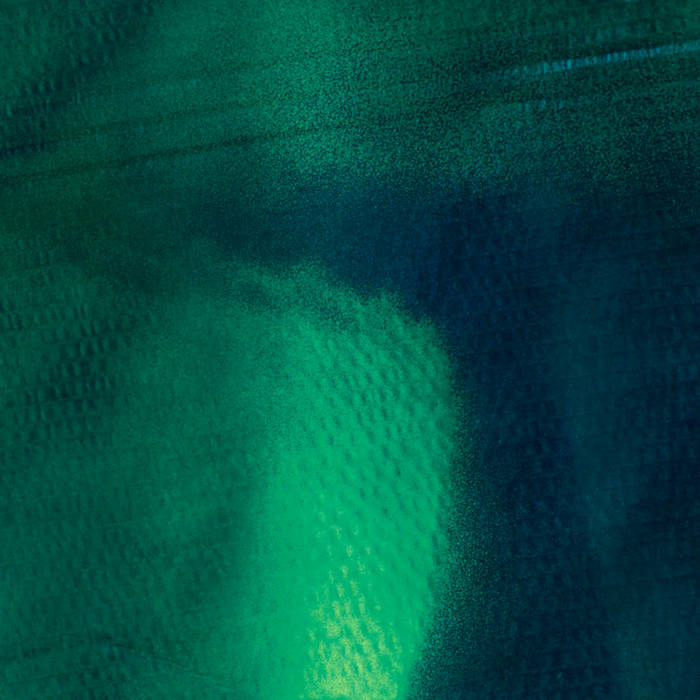 Walter Benjamin begins his Berlin Childhood around 1900, a book in the form of a series of vignettes, with the following two sentences: "Not to find one’s way around a city does not mean much. But to lose one’s way in a city, as one loses one’s way in a forest, requires some schooling."

Entitled Tiergarten, after the eponymous park in central Berlin, this passage from Benjamin's memoir written in the 1930s which refers to the city as a sometimes alien piece of nature that you moonwalk through can still be resuscitated, even a century after the initial experiences described.

It may be tempting to describe the first collaborative album by Katharina Grosse and Stefan Schneider, titled Tiergarten as a collaboration of an internationally renowned visual artist and an equally internationally renowned musician. Grosse's distinctive approach to non-representational painting on an architectural scale, well beyond the limits of the canvas, has been the subject of exhibitions worldwide, at art institutions including New York's MoMA PS1, Chicago's Rennaissance Society, or the Palais de Tokyo in Paris. And Schneider's musical activities have gone from being a founding member of Dusseldorf outfit Kreidler, through his longtime commitment as a member of Berlin-based trio To Rococo Rot, to his many performances and recordings with musicians including Krautrock legends Hans-Joachim Roedelius (Cluster), Klaus Dinger (Kraftwerk, NEU!), and Hans-Joachim Irmler (Faust), or contemporary drumming virtuoso John McEntire (Tortoise, The Sea and Cake).

But while each of Grosse's and Schneider's activities have resonated around the globe, the rather technical, disengaged term "collaboration" seems inept to describe what they do together. Rather, it's a sort of almost telepathic understanding that has grown out of a long friendship. Tiergarten is an instrumental album of two performers on analogue synthesizers interacting, communicating, contemplating, complementing each other through their instruments and intuitions.

The two first met in the late 1980s. Both were studying fine arts at Dusseldorf Academy. Grosse painted, Schneider photographed. Conversations between Schneider and Grosse never stopped; throughout the 1990s and 2000s, on their different trajectories as artist and musician respectively, they stayed in touch.

After a number of performances between 2008-2015, often with and within Grosse's painted and sculpted environments, the two decided to record an album together. Over the course of two years, with a self-imposed limit of two players and a sparse set-up of just a few synthesizers, the two made recordings. They prepared for these recordings, but separately – and then, intuitively and listening to one another playing live, formed clusters of sound, an intensive conversation "without fixations" (Grosse). However, what these tracks evoke are not concrete, static images, but surprising, lively scenes. Analogue synthesizers – at least the way Grosse and Schneider make use of them in a sense of personal as well as aesthetic trust – are in themselves reminiscent ofliving organs in the sense that they can be more than simply tools giving a linear output to straightforward input, instead drifting into unknown territory.

Benjamin's way of navigating the city almost like blindfold, perceiving the street names like the snapping of twigs and the sunlight in small streets like the echo of mountain valleys, becomes the musical programme of the unprogrammatic.

"We don't discuss, but we do come to an agreement nevertheless," says Grosse. There is no target they aim for, other than the formal parameters of an album, with nine tracks, with the shortest, Schattenmodell, just over a minute – sounding like a positively nervous flock of robot birds –, and the longest the opening track Blueberry at 8:19 minutes, a slowly probing venture into the bass and treble strata of a musical exoplanet. The nine tracks form a cycle in which certain motifs or soundscapes reoccur and subtly mutate – like sirens, dark rivers, gravel, a rippling water surface, cells multiplying, ice melting.

And the album artwork in turn is a visual resonance of that relationship. The cover features the close-up onto a detail of one Grosse's spray-painted works, shimmering in hues of green and blue on a corrugated cardboard surface. You see paint runs and spray coronas, and still the tones and textures make you think of an insect's wing, or snake skin. The inner sleeve, in turn, shows photographs by Schneider: a scree slope up in the high mountains, just at the upper end of the treeline, a bird's eye view onto a majestic yet delicate structure punctuated by green brushes and grey stones. Just as the music, the artwork of cover and inner sleeve suggests a flip-flopping between micro- and macro perspectives.

As Grosse puts it: "In our music, affects such as aggression or delicacy are not active agents that are good, or objectionable – instead, they just are." There are no role models to embrace or personas to identify with. Hence one may attempt to describe the music palpably as reminding of Sci-Fi worlds or organic tissue under the microscope. You still need these slightly lopsided metaphors to describe something that you, strictly speaking, never heard before, because Grosse and Schneider manage to squeeze and tickle sounds out of these instruments that are still quite unfathomable.

After Weissensee by NEU!, and Neukoln bei Bowie and Eno – both named after districts of Berlin – Grosse and Schneider, with Tiergarten, bring their very own, fresh approach to this short but significant tradition of pulsating analogue synthesia dedicated to Berlin and its historic and aesthetic landscape.

Jörg Heiser is a writer living in Berlin. He is Editor at large of frieze magazine, the Director of the Institute of Art in Context at the University of Arts in Berlin, and a member of the band La Stampa.

Bandcamp Daily  your guide to the world of Bandcamp